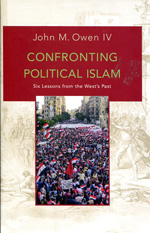 Confronting political Islam
six lessons from the West's past

How should the Western world today respond to the challenges of political Islam? Taking an original approach to answer this question, Confronting Political Islam compares Islamism's struggle with secularism to other prolonged ideological clashes in Western history. By examining the past conflicts that have torn Europe and the Americas--and how they have been supported by underground networks, fomented radicalism and revolution, and triggered foreign interventions and international conflicts--John Owen draws six major lessons to demonstrate that much of what we think about political Islam is wrong. Owen focuses on the origins and dynamics of twentieth-century struggles among Communism, Fascism, and liberal democracy; the late eighteenth- and nineteenth-century contests between monarchism and republicanism; and the sixteenth- and seventeenth-century wars of religion between Catholics, Lutherans, Calvinists, and others. Owen then applies principles learned from the successes and mistakes of governments during these conflicts to the contemporary debates embroiling the Middle East. He concludes that ideological struggles last longer than most people presume; ideologies are not monolithic; foreign interventions are the norm; a state may be both rational and ideological; an ideology wins when states that exemplify it outperform other states across a range of measures; and the ideology that wins may be a surprise. Looking at the history of the Western world itself and the fraught questions over how societies should be ordered, Confronting Political Islam upends some of the conventional wisdom about the current upheavals in the Muslim world. 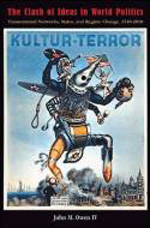 Clash of ideas in world politics