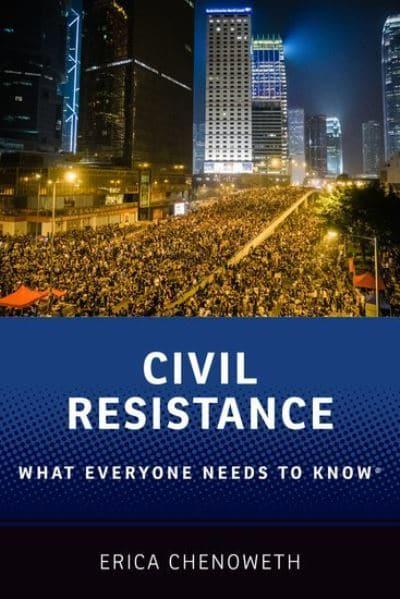 Civil resistance
what everyone needs to know

A sweeping overview of civil resistance movements around the world that explains what they are, how they work, why they are often effective, and why they can fail. Civil resistance is a method of conflict through which unarmed civilians use a variety of coordinated methods (strikes, protests, demonstrations, boycotts, and many other tactics) to prosecute a conflict without directly harming or threatening to harm an opponent. Sometimes called nonviolent resistance, unarmed struggle, or nonviolent action, this form of political action is now a mainstay across the globe. It was a central form of resistance in postwar anti-colonial movements, the 1989 revolutions, and the Arab Awakenings, and people are practicing civil resistance at higher rates than ever before around the world, including in the United States. If we want to understand the manifold protest movements emerging around the globe, we need a thorough understanding of civil resistance and its many dynamics and manifestations. In Civil Resistance: What Everyone Needs to KnowR , Erica Chenoweth-one of the worlds leading scholars on the topic-explains what civil resistance is, how it works, why it sometimes fails, how violence and repression affect it, and the long-term impacts of such resistance. Featuring both historical cases of civil resistance and more contemporary examples such as the Arab Awakenings and various ongoing movements in the United States, this book provides a comprehensive yet pithy overview of this enormously important subject.