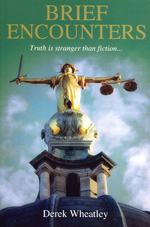 Derek Wheatley writes fiction that is based on fact. These short stories are founded on real cases in which he acted as Counsel in criminal trials at the Central Criminal Court, the Old Bailey, when he was a young man at the start of his career as a barrister. Fictionalised they had to be, since the Defendants were real people, who might still be living... and you might be left with the impression that but for the skills of their advocate, the fictional Tam Pearse, they would have been found to be "Guilty as charged", and sentenced to the imprisonment which they had richly deserved. It is said that "Truth is stranger than fiction" but you are left to decide this tricky question for yourselves.