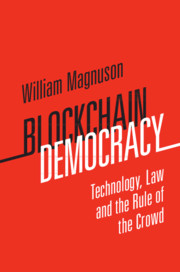 Blockchain democracy
technology, Law and the rule of the crowd

In Blockchain Democracy, William Magnuson provides a breathtaking tour of the world of blockchain and bitcoin, from their origins in the online scribblings of a shadowy figure named Satoshi Nakamoto, to their furious rise and dramatic crash in the 2010s, to their ignominious connections to the dark web and online crime. Magnuson argues that blockchain's popularity stands as a testament both to the depth of distrust of government today, and also to the fervent and undying belief that technology and the world of cyberspace can provide an answer. He demonstrates how blockchain's failings provide broader lessons about what happens when technology runs up against the stubborn realities of law, markets, and human nature. This book should be read by anyone interested in understanding how technology is changing our democracy, and how democracy is changing our technology.