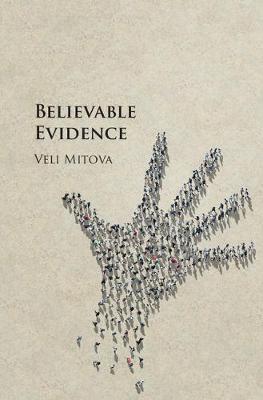 Believable Evidence argues that evidence consists of true beliefs. This claim opens up an entirely overlooked space on the ontology of evidence map, between purely factualist positions (such as those of Williamson and Dancy) and purely psychologist ones (such as that of Conee and Feldman). Velislava Mitova provides a compelling three-level defence of this view in the first contemporary monograph entirely devoted to the ontology of evidence. First, once we see the evidence as a good reason, metaethical considerations show that the evidence must be psychological and veridical. Second, true belief in particular allows epistemologists to have everything they want from the concept of evidence. Finally, the view helps us locate the source of the normative authority of evidence. The book challenges a broad range of current views on the ontology of reasons and their normative authority, making it a must-read for scholars and advanced students in metaethics and epistemology.