Approval Voting proposes a compelling way to elect some 500,000 officials in public elections. Under this system voters may vote for, or approve of, as many candidates as they like in multicandidate elections. Among the many benefits of approval voting are its propensity to elect the majority candidate (rather than the strongest minority candidate, as often occurs under plurality voting), its relative invulnerability to insincere or strategic voting, andby offering voters the opportunity to influence election outcomes more equitablya probable increase in voter turnout. Since the publication of the first edition of this book, its arguments in favor of an election reform practically unknown in 1983 have stood the test of time. Perhaps the proof of the pudding lies in the adoption of approval voting by about a dozen professional societiesseveral with tens of thousands of membersand their generally favorable experience with it. After a generation of discussion and debate on the subject, the authors remain convinced that Approval Voting is as relevant today as it was when rigorous analysis and systematic empirical research on this election reform began more than 30 years ago. 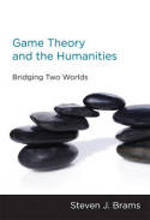 Game theory and the humanities