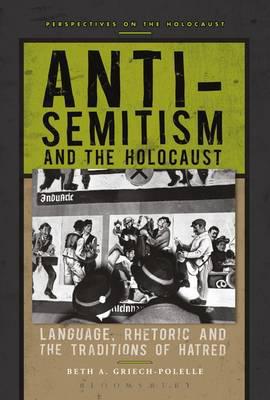 Anti-semitism and the Holocaust
language, rethoric and the traditions of hatred

Anti-Semitism and the Holocaust surveys the history of the Holocaust whilst demonstrating the pivotal importance of the historical tradition of anti-Semitism and the power of discriminatory language in relation to the Nazi-led persecution of the Jews. The book examines varieties of anti-Semitism that have existed throughout history, from religious anti-Semitism in the ancient Roman Empire to the racial anti-Semitism of political anti-Semites in Germany and Austria in the late 19th century. Beth A. Griech-Polelle analyzes the tropes, imagery, legends, myths and stereotypes about Jews that have surfaced at these various points in time. Anti-Semitism and the Holocaust considers how this language helped to engender an innate distrust, dislike and even hatred of the Jews in 20th-century Europe. She explores the shattering impact of the First World War and the rise of Weimar Germany, Hitler's rhetoric and the first phase of Nazi anti-Semitism before illustrating how ghettos, SS Einsatzgruppen killing squads, death camps and death marches were used to drive this anti-Semitic feeling towards genocide. With a wealth of primary source material, a thorough engagement with significant Holocaust scholarship and numerous illustrations, reading lists and a glossary to provide further support, this is a vital book for any student of the Holocaust keen to know more about the language of hate which fuelled it.