An agenda for a growing Europe
the Sapir report

Over the past decade European economic integration has seen considerable institutional success, but the economic performance of the EU has been varied. While macroeconomic stability has improved and an emphasis on cohesion preserved, the EU economic system has not delivered satisfactory growth performance. This book is the report of a high-level group commissioned by the President of the European Commission to review the EU economic system and propose a blueprint for an economic system capable of delivering faster growth along with stability and cohesion. It assesses the EU s economic performance, examines the challenges facing the EU in the coming years, and presents a series of recommendations. 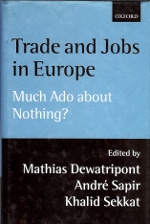 Trade and jobs in Europe.