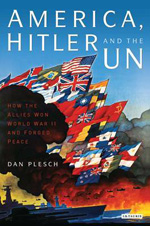 America, Hitler and the UN
how the allies won World War II and forged a peace

On 1 January 1942, Churchill and Roosevelt issued a 'Declaration by United Nations' with 24 other states. This marked the beginning of the UN in a real and tangible form. Yet today many people have forgotten that the UN was forged in the midst of the confusion and complexity of wartime. How did the armies of the United Nations co-operate in the final years of World War II to contain - and ultimately reverse - Nazi expansionism? And when and for what purpose did the UN undertake to tackle the international economic and social challenges, not only of warfare but of a post-war world transformed beyond reconition? Drawing on previously unknown material from the UN archives, Dan Plesch analyses responses at all levels of society, from high level political elites to grass roots level. Arguing that the Allied defeat of Nazism should properly be called a United Nations victory, Dan Plesch has pieced together the full story of how the UN intervened in surprising ways at a pivotal time in European history. America, Hitler and the UN is an important addition to the literature of World War II and essential reading for anyone with an interest in military or diplomatic history or contemporary international relations.