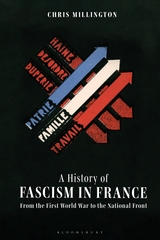 A History of Fascism in France explores the origins, development, and action of fascism and extreme right and fascist organisations in France since the First World War. Synthesizing decades of scholarship, it is the first book in any language to trace the full story of French fascism from the First World War to the modern National Front, via the interwar years, the Vichy regime and the collapse of the French Empire. Chris Millington unpicks why this extremist political phenomenon has, at times, found such fervent and widespread support among the French people.

The book chronologically surveys fascism in France whilst contextualizing this within the broader European and colonial frameworks that are so significant to the subject. Concluding with a useful historiographical chapter that brings together all the previously explored aspects of fascism in France, A History of Fascism in France is a crucial volume for all students of European fascism and France in the 20th century.

Acknowledgments
List of Abbreviations
Introduction: What was Fascism?
1. Searching for a French Mussolini during the 1920s
2. Bloodshed in the City of Light: 6 February 1934
3. The Army of the Death's Head: The Croix de Feu
4. Fascism Defeated? The Parti Social Français and the Parti Populaire Français
5. Bombs, Bullets, and Bloody Murder: The Cagoule
6. National Revolution, 1940-1944
Epilogue: The National Front
Appendix: The French Allergy to Fascism: A Historiographical Essay
Bibliography