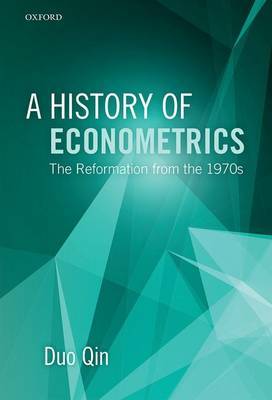 A history of econometrics
therReformation from the 1970s

Reformation of Econometrics is a sequel to The Formation of Econometrics: A Historical Perspective (1993, OUP) which traces the formation of econometric theory during the period 1930-1960. This book provides an account of the advances in the field of econometrics since the 1970s. Based on original research, it focuses on the reformists' movement and schools of thought and practices that attempted a paradigm shift in econometrics in the 1970s and 1980s. It describes the formation and consolidation of the Cowles Commission (CC) paradigm and traces and analyses the three major methodological attempts to resolve problems involved in model choice and specification of the CC paradigm. These attempts have reoriented the focus of econometric research from internal questions (how to optimally estimate a priori given structural parameters) to external questions (how to choose, design, and specify models). It also examines various modelling issues and problems through two case studies - modelling the Phillips curve and business cycles. The third part of the book delves into the development of three key aspects of model specification in detail - structural parameters, error terms, and model selection and design procedures. The final chapter uses citation analyses to study the impact of the CC paradigm over the span of three and half decades (1970-2005). The citation statistics show that the impact has remained extensive and relatively strong in spite of certain weakening signs. It implies that the reformative attempts have fallen short of causing a paradigm shift.