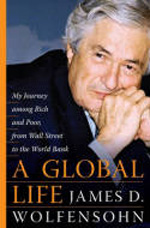 A global life
my journey among rich and poor, from Sydney to Wall Street to the World Bank

This is the autobiography of the larger-than-life, visionary financier and philanthropist who led the World Bank through one of its most intense and tumultuous decades in the struggle against global poverty. As President of the World Bank for a decade, James Wolfensohn tackled global poverty and its consequences with a passion and energy that made him a uniquely important figure in this fundamental arena of change. Now the renowned financier, philanthropist and public citizen writes of his life and his beliefs in an autobiography with international appeal.Born in Australia, Wolfensohn was an Olympic fencer, a skilled cellist and a man of surpassing imagination and drive, who was educated at the University of Sydney and at Harvard and became a prominent banker in London and New York. He served as chairman of the Kennedy Centre and Carnegie Hall and amassed a reputation for effective leadership in the private and non-profit sectors. But it was his tenure at the World Bank that made him an international force. Since its creation after World War II, the bank has poured hundreds of billions of dollars into projects to alleviate poverty. At times it has been seen as a symbol of what can be done. At times, it has been a symbol of frustration and misunderstanding.In his work, and in this book, Wolfensohn explores the causes of continuing poverty and his approach to fighting it. Using a lifetime of experience in the banking sector, Wolfensohn motivated, devised, schemed, charmed and bullied all the constituencies at his command to increase the world's wealth. Here he assesses his successes and his failures.The book is also an exploration of Wolfensohn's personality and character. As a Jew, he faced anti-Semitism in the merchant banking world of London, as an Australian, he navigated New York and Washington with uncommon skill and as an international public servant, he has carved a distinct path in Asia, Africa and Europe for the bank. Most recently, he was a special envoy in