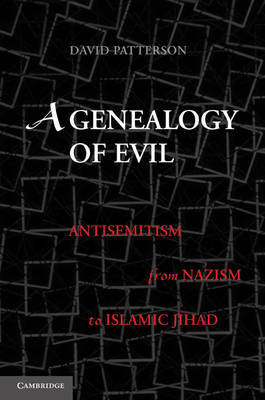 A genealogy of evil
anti-semitism from nazism to islamic Jihad

Based on extensive scrutiny of primary sources from Nazi and Jihadist ideologues, David Patterson argues that Jihadist anti-Semitism stems from Nazi ideology. This book challenges the idea that Jihadist anti-Semitism has medieval roots, identifying its distinctively modern characteristics and tracing interconnections that link the Nazis to the Muslim Brotherhood to the PLO, Fatah, Hamas, Islamic Jihad, Hezbollah, Al-Qaeda, the Sudan, the Iranian Islamic Republic, and other groups with an anti-Semitic worldview. Based on his close reading of numerous Jihadist texts, Patterson critiques their antisemitic teachings and affirms the importance of Jewish teaching, concluding that humanity needs the very Jewish teaching and testimony that the Jihadists advocate destroying.